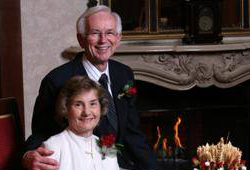 When Norman and Carolyn Taylor were growing up, they were close enough to the Great Depression to remember the economic difficulties their parents faced. As a result, they became financially conservative. Norm describes their approach this way, "We don't buy something unless we can afford it or unless we really need it."

Throughout his career of more than four decades with the U.S. Navy and in civil service jobs, Norm always put some savings aside and was able to make some stock purchases. He and Carolyn, who is a nurse and whose parents (D.O. and Muriel Smith) were American Baptist missionaries in Burma, planned well for their family's needs. They also considered possible future medical costs and even invested to subsidize their expected retirement income. Into their second year of retirement they were reviewing their investments with their financial advisor.

Norm describes that meeting: "My wife and I were reminded that we had some stock that had greatly appreciated and in which we were 'over-invested.' Obviously, if we sold a portion of that stock, we would pay capital gains taxes on some significant increases. But if we gave it as a contribution, that would save the tax payment, which would actually provide more funds for making a larger contribution. So, we wanted to sell the stock rather quickly, but we weren't sure where all of it would be distributed."

Norm has served as a representative for the American Baptist Foundation in the Washington, D.C. area since 2001 and knew about the benefits of establishing a Donor Advised Fund. Illustrating one of the advantages of this type of fund, Norm says, "We don't have to be rushed into deciding where we should donate the sale of our appreciated stock, but we receive a charitable tax deduction for our contribution in the year we place it in the Fund and some flexibility in the timeframe for its distribution. We literally have 'time for giving' while retaining the flexibility to meet developing needs of the ultimate recipient."

The built-in delay in the distribution of the donated asset's value can lead to an additional advantage, which Norm clarifies: "If a donor gives appreciated stock worth $10,000 to his or her Donor Advised Fund, for instance in January, but doesn't distribute the proceeds until August or September, it is possible to have more money for a contribution. During those intervening months, the assets have time to grow since the Foundation invests them. So, in a year of 4% annual growth, a $10,000 donation in eight months may become $10,250 or more!"

For the Taylors, the type of giving provided by a Donor Advised Fund yields flexibility and leads to fulfillment. "When we see a need," Norm explains, "we have some available money in the Fund that we can recommend to the Foundation be used for that particular ministry or mission. It's been a great way for my wife and me to know that we can support a particular cause and our contribution is being used for an identified purpose. We've been able to give to some churches and seminaries, some of our mission outreach through National Ministries and International Ministries, the American Baptist Historical Society, and the D.C. Baptist Convention. It's worked very, very well for us."

The time that Norm and Carolyn have in their retirement years has truly become a "time for giving." Norm celebrates that fact, saying, "I've indicated to my financial advisor that because of our savings and the retirement incomes that my wife and I have, we're financially secure and our family is taken care of. Therefore, all the investments we have can go toward contributions in the future. Eventually, as mandatory requirements dictate IRA withdrawals, we will use them to add to our Donor Advised Fund!"